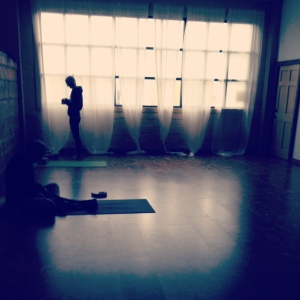 This morning I decided I was going to get up early and head to a yoga class. Since I’ve been unemployed I’ve been trying to take a lot more classes. It helps clear my head, it helps me get inspiration for the classes I’m teaching… it’s a win win… There are days when I have to sometimes psyche myself up for a class, but once I get to the studio I’m always so glad that I went. I have never, not once, regretted going to a yoga class.

But today I was fighting my practice, I mean hard core fighting my practice… I decided last night before I went to bed that I was going to get up early no matter what and get to the studio. No matter that I’m not a morning person, no matter that I haven’t gotten out of bed before 8:30 in the last three weeks… I have been bound and determined to move my person everyday, and right now its frigidly cold in Oregon, so running isn’t as appealing as it could be. Not to mention the fact that yoga lets me be a little social, and the teacher, whom I adore, will be moving soon, so I really wanted to get a class in.

My alarm went off, I only pushed snooze twice, got up, got ready, walked the dog, and made it to class. Victory! At least victory for about 45 minutes… and then something clicked in my brain and I was just done… with 30 minutes left in class, I mentally checked out, every movement stopped feeling “right” and I got totally in my head.  I even caught myself at one point doing a not so subtle eye roll… what is wrong with me? Here I am, a yoga teacher, and its not like anyone forced me to be in this class, and my mind and my body are both rejecting the movement…

As a student, and especially as a teacher I know that yoga is about leaving your Ego at the door. Its not about what the person on the next mat is doing, its about you and your practice, and meeting your practice where you are. I KNOW this… and I was repeating this to myself, as I was struggling… and why? I’m secure enough with my own person and my own body, to do my own thing in class… but there was this part of me that just kept going through the motions… (all the meanwhile eye rolling… I’m a terrible student) The practice was fighting me, and I was fighting it back rather than just surrendering and doing actually what I needed… And its not like the teacher would have cared had I just laid down on the mat and spent 30 minutes getting my mind where it needed to be… still hours later I’m sitting here thinking “why didn’t I just do that?”

I think part of it is actually that I know too much… and I often struggle with finding that perfect balance between pushing the right amount/ pushing too much. Sometimes when things are challenging, it is exactly what we need to be doing, we need to push through the fight or flight reflex and come out the other side… at least that is what I was telling myself in class today. “just keep pushing, just keep moving, its only 15 more minutes.”  But why did I think it was better to keep pushing than just listening to what I needed?  Again it’s the teacher in me… No, I didn’t really want to be doing Ardha Chandrasana… I didn’t want to do it at all… but rather than just taking a breath & watching the other students enjoy this beautiful pose, my inner dialog was running saying “This is maybe exactly what you need because this pose combats depression, is a mood elevator, relieves anxiety, helps you feel more balanced , and reduces stress! This pose will help you feel supported and joyful, and that is exactly what you need in your life right now…” and yet I was fighting the pose, I was scowling the whole time, I was mentally and physically ready to be done… so why didn’t I just listen to that?

I know there is a distinct difference between giving into what you need, and giving up… but I think we don’t often listen to that… At least I don’t. I don’t often say “its ok to not push today.”

Especially when it comes to yoga… Since I haven’t been “working” I’ve been trying to be more active, and working on myself… and in the past I haven’t really been called to restorative types of yoga. I have taught several restorative and gentle classes, but usually when I take a class I want it to be more active. I want to move my person…But maybe what I really need is to find a slower practice… to really settle into the relaxation and the meditation… it makes sense. Even though my days are slow… my life as I know it is kind of in chaos. I lost my job of 5 years, I lost my relationship, I’m losing my roommate, I’m stressed mentally, and financially, and it would make totally sense that really what my brain is needing is to actually slow down…

And part of me is mad that I didn’t listen to that this morning when my alarm went off… No, I don’t regret going to yoga this morning… the first 45 minutes of class were exactly what I needed… but then why didn’t I just trust my body and my mind and let the rest go? (And why am I still worked up about it hours later?) Sigh…  I really need to start living “take what you need, and leave the rest”… my new mantra for at least the rest of the weekend, and hopefully beyond.

One thought on “Take what you need, and leave the rest. My morning spent fighting my yoga practice”