“I’m so glad I live in a world where there are Octobers.”
― L. M. Montgomery, Anne of Green Gables

Don’t mind me over here basking in the last few days of what has been a truly spectacular October in the PNW. (I’m also basking in the Red Sox World Series victory glow… which lets be honest, post-season baseball is part of what gives this plucky little month its charm.) It’s not lost on me that decorative gourds, pumpkin spice everything, plaid button downs and oversized scarves and all the other signifiers of Fall are these days labeled “basic” But that isn’t going to stop me from doing a round-up of few of my absolute favorite things associated with October.

–You’ve Got Mail on repeat: This requires no real explanation. Autumn rolls around, the movie gets turned on, and you spend the rest of the season swooning over bouquets of newly sharpened pencils.

I grew up in a part of the world where our two seasons were Summer and Snow. There were some pretty glorious things about both of those times of year, but collecting leaves and heading to the pumpkin patch were not some of them. I still have a habit of collecting leaves when I’m out walking and pressing them between magazine pages and dropping them into hand written letters.   My mom and I still gather leaves and fashion art projects out of them… We’ve been known to make dinosaur and people shapes out of the leaves and glue them to craft paper its kind of dorky, but there is something so nostalgic about it.

I often do make-shift art installations by fastening pressed leaves to the living room wall with washi tape. Need some serious leaf inspiration? Check out the work of Hilary Waters

-I already alluded to Post-Season Baseball, which is particularly exciting when its your team, but even if its not, I find something about watching Major League Baseball in the month of October especially engaging.

I’ve missed one or two over the years, but one of my favorite traditions with my group of college friends is to make an annual trek to the pumpkin patch. Its kind of incredible that we can get our co-ed group of thirty-something’s together for this yearly tradition.

This year my pumpkin patch adventure turned to tragedy when, after finding the perfect 35 lb pumpkin, I had a small accident involving my shopping cart full of pumpkins getting stuck in a rut, dumping the pumpkins everywhere as the cart fell on top of them and me on top of the cart. It was epic in its awkwardness. Thankfully some strangers came to my aid, and It appeared as though my 35 lb pumpkin child was unscathed! Appearances can be deceiving though… a week later as I was getting ready to carve said pumpkin, I discovered two giant bruises towards the bottom. I decided I could live with them though, and it wouldn’t hinder the design I was going to carve so I decided to press on… then a giant black and red spider came crawling out from somewhere (and then I started thinking “this is a 35 lb pumpkin, I had to hug this thing to my body like a small child to even get it inside… how close was that spider to crawling on me? Did it crawl on me? Does it have friends? Should I burn the house down?”) Never-the-less, I persisted, I disposed of the spider and kept sawing away at the top…. I should have known all of this was foreshadowing what came next… as I wiggled loose the lid of the pumpkin and lifted it away from its seams there was an outpouring of fruit flies. Hundreds and hundreds of fruit flies.   I dropped the lid on he proverbial Pandora’s Box, scooped up the entire thing and vehemently threw it in the compost bin.   If at first you don’t success, try try again? which, side note. I discovered this year, (perhaps the accident/spider/Fruit fly scenarios has something to do with this) I don’t actually like carving pumpkins. I like to eat the pumpkin seeds and I like the idea of carving pumpkins, but my knife skills are always lacking, and after trying to carve some intricate letters, many failed attempts, two broken pumpkin saws, I began to have that feeling of a failed craft project. I wasn’t having fun, and my self-esteem was getting lower by the second. I DID manage to salvage my pumpkin, and the seeds were really delicious, so there IS that, but I’ve already put a sticky note in my planner for next year reminding me that carving pumpkins doesn’t bring me joy, and I should just not even go there. But you cannot keep this girl away from a good pumpkin patch adventure! 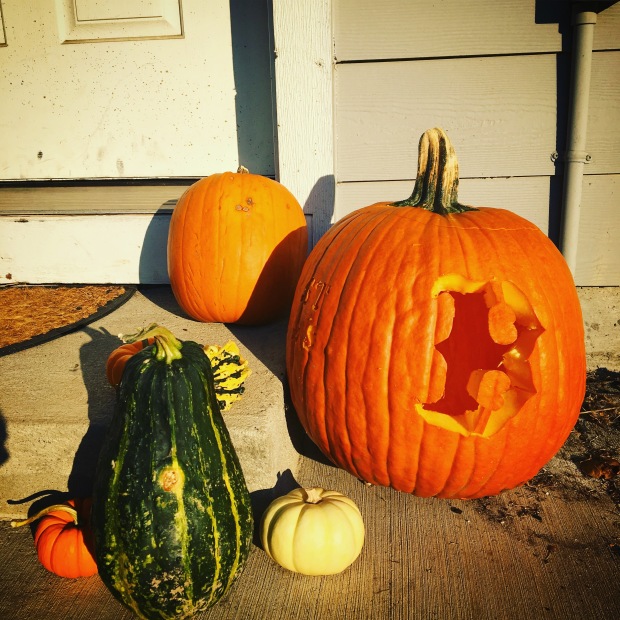 All the pumpkin recipes. I actually think pumpkin spice is kind of gross, so you won’t find me signing the praises of the PSL. But you will find me whipping up weekly batches of pumpkin pancakes, pumpkin hummus, and this ridiculously scrummy pumpkin mac & cheese. (also add some crispy sage… you’ll thank me.)

What are some of your favorite things about October?