28 years ago today, I was harvested from my mother’s womb ( I say harvested because I was a C section baby, and my birthday was picked off a calendar, they opened her up & out I was pulled… Is that technically a birth? I was picked like a ripe cherry… ) I’m actually eternally grateful to my parents for picking the 21st as the day I would be extracted into the world… A good odd numbered day, the summer solstice, and longest day of the year, they clearly knew what they were doing.

Oddly enough I do feel a fairly deep connection with the solstice. Nothing pagan or anything (don’t freak out mom) I always do sun salutations on my birthday that correspond with the number of years I am, and it seems even more meaningful to celebrate this tradition on the solstice.

Over the past few years I’ve come up with some other birthday rules/ traditions that I would highly suggest following. Or you, know, just find and follow your own bliss.

1) indulge a little (sometimes a lot) I always take myself shopping for my birthday. I know what I like and what I want/ need and it feels nice to splurge. Plus it’s a good time of year to get some necessities ( summer sandals, shorts, new makeup. etc.) it’s true that this year I might have gone a little overboard, which is always the danger. I hadn’t been shopping in a while and truth be told I’d probably be better off splurging on smaller items once a month than an epic day long birthday shopping spree… But a least I’m great a scoping out bargains.

Two things I ALWAYS buy myself for my birthday are alcohol and lingerie ( which sounds kind of like a scandalous combination… If only that were my life!) you always need a good bottle of booze around, and as for the other, even if I don’t have anyone in my life who appreciates the lingerie ( minus the dog, who would probably enjoy munching on it) it makes me feel sexy and confidant, and that is half the battle right there. Even if no one knows what I’m wearing in the privacy of my own home ( well ok, I guess everyone knows now…) I think every woman should buy herself something that makes her feel sexy and pretty, even if there is no one else to appreciate it. Don’t get me wrong, there are still a lot of evenings spent in sweat pants. But it’s nice to have options. Pretty options. PLUS I really do need to restock on unmentionables every year because my troll pet tends to eat all the cute skivvies ( I’ve tried to feed him the ugly granny panties, and he is un-interested… Which in itself should probably be a sign. But come on, we a have those underwear for running, or whatever, and inevitably they will be the underwear you happen to be wearing on the day you get hit by a bus or get your skirt tucked into your underwear… And it will be embarrassing and traumatic, and you will think ” why do I even own this tragic pair of underwear in the first place” and the answer to that is: it is really really uncomfortable to teach/ take a yoga class in cute/ sexy underwear. Either way, Toby will not eat the ugly ones, even if they are left on the bathroom floor… However he will eat anything remotely lacy… Pervert). Anyway, what I’m getting at, is that is usually a good idea to buy yourself new underwear once a year anyway, and why not spice it up a bit for good measure?

2) have low expectations. Birthdays are birthdays and they come and go, and people forget, and the world doesn’t stop. I think it’s important to do something special for yourself, ad maybe plan something with friends, but overall I’m done with the expectations, and so the day always turns out to be just perfect. I usually plan a dinner or something with friends either before or after the actual day, so the day itself can just be lazy and spontaneous. ( though this year I did a pre dinner with one group of friends, and real dinner with another, and it was just delightful… Minus the birthday hat that was forced upon me by the restaurant staff… I mean it was fine, but it was absolutely against my will.)

3) eat whatever the hell you want. Today for breakfast I made a tower of meat & cheese. Enough said. ( especially if there is a foam hat involved… You earned it!)

There are other tried and true birthday rules and traditions that I have, but I’m full of food and wine, I am writing this from my phone, and I have to get up and go back to work tomorrow. So instead, I will say goodnight, and spend the last few minutes of the solstice out basking in the moonlight, sans birthday crown. 🙂 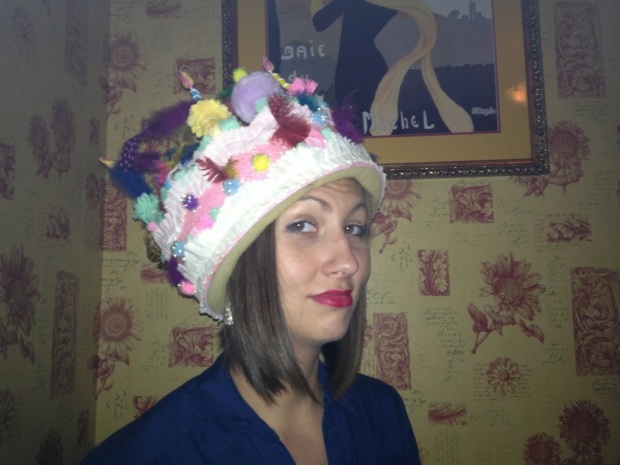 I know, will this crazy lady ever be done writing blog posts about her raspberries? The answer is yes. Probably. In a while when there are more different fun things to harvest like blueberries and figs… I just cannot get over the fact that I have a garden that is growing real things that can feed me and my friends and co-workers. There are So. Many. Raspberries. ( and peas, but that is an entirely different post)

Everyday when I’m out picking raspberries two thing repeatedly pop into my head without fail. The first is the poem by William Carlos Williams “The Red Wheelbarrow” ( I of course tried to be “fancy” or just normal and link this, but once again blogging from my phone =epic fail. http://www.poets.org/viewmedia.php/prmMID/15537

Anyway, everyday I recite this poem to the raspberries, only I replace the word wheelbarrow with raspberries, and the word chickens with bulldog. Yeah, I’m the girl who recites poetry to her plants… Daily. I can’t help it. Go find some raspberries & try not to say that poem to them… So much depends upon the red raspberries… I’m compelled.

The second thing that pops into my head while pretty much leaning my entire body weight across the raspberry patch to reach that one perfect berry is ” dear god, if I were to fall into this raspberry patch, I wonder how long it would take for someone to find/ rescue me! I’m due at work in 45 minutes, so hopefully someone would start worrying, and my dad should be here in about 3 hours to let the dog outside… So he could fish me out of here”. Literally every day I think about that, because when you live alone you need to start coming up with a backup plan in case you fall into a bramble of raspberries…. At least I wouldn’t go hungry…

I’ve been at my new job exactly one week (or 5 actual working days) and I’m settling into the change of pace. Life is definitely taking a different direction than I ever expected it to, but I’m pleased to report that I’m actually pretty happy. There have been a lot of ups and downs, and I think I’ve had to adjust my life plan about 17 times in the last few months… and now that I’m on plan Q) I’m realizing that sometimes it really just is better to not plan out your life… This method has really worked for me up until a few months ago when I actually started to make plans… suddenly I was thinking about my future, my education, getting married… what I really wanted to do with my life, and my efforts to actually take a step towards all of those goals pretty much crumbled around me… (got the rejection letter from graduate school last night).

But I have a really good feeling about this new adventure that I’m starting on, and am deciding that, at least for now, I’m a-ok with living one day at a time… Sure I’m still making plans… I know that my computer is about to bite the dust, so I’m going to start saving for a new one… and after that, perhaps a Dyson vacuum (Bulldogs shed more than you would ever think possible… seriously… imagine a shedding dog, and then multiply it times a million… Tiny. White. Hairs. Everywhere. It’s a good thing I love him).

I’m still in that awkward phase of training where everyone I will be managing has been there much much longer than I have… and knows much much more about what needs to be done… but overall it is very humbling. I’m not so full of myself to go in there and say “I’m the manager, lets shape things up. “ I’m more the female version of George Michal from Arrested Development trying to manage the Banana Stand “I’m Mr. Manager!” and then he lets Maebe throw away all the bananas and take money from the register. (just to clarify, I’m not throwing away product, or taking money out of the register! But my employees do know a little more than I do, and for right now, I’m perfectly ok with that). I know I will find my stride… in the meantime I’m running the till like a rockstar (as the owner told me “on the weekends, if you are on till, don’t leave your station unless someone has a gun to your head” he was kidding of course, but it is good advice) I’m also testing the waters as a Barista… which I mostly have down until it comes down to the milk steaming/ coffee art… My first attempt at latte art was rather phallic looking… who knows, maybe I found my niche, some people might be into that! But since it is a family friendly place, I’d better keep practicing… (side anecdote… We had to go to the coffee headquarters for training, and the barista who trained my group just happened to be the barista that I may or may not have asked out 3 years ago by passing him a note… personally I thought the note was kind of charming…but I never heard from him, so obviously it wasn’t that charming… anyway… there I am somewhat terrified of making coffee, and then I end up making a latte with foam in the shape of a penis for a guy I awkwardly asked out 3 years ago… Welcome to my life.)

And with that being said, it is my day off, and it’s gorgeous outside, and I have a plethora of things to catch up on… so I’m going to go do just that… I’m sure I will be blogging a bit less until I settle into my schedule, but I hope to keep it interesting, I hope you keep reading… and if you are in the area, stop in for a latte so I can get some practice!