January 14, 2015
Happy January Y’all. Tis the season, of Inventory, resolutions, and motivation.  Last year I listed off several goals/resolutions/projects… and like most people they kinda fizzled out a few months in, though I did use my juicer SO many times, and I did succeed in taking January off from beer drinking. Alas, I still haven’t seen a nutria in real life (and I’ve been told by a few people that if this was my goal, I need to dream bigger.. but whatever… I did some pretty amazing things in 2014, I don’t think having the goal of seeing a giant gross water rodent should deter from all the awesomeness that transpired last year. And lets be honest, a Nutria is pretty much the closest thing to a Rodent Of Unusual Size I’m ever going to see, so I still maintain, it was a legitimate goal… clearly I need to get up earlier and hang out by more water… anyway I digress.)

Last year I also decided that I wanted to draw inspiration and focus on a few key words and ideas in my daily life, and for me this was a much better approach to the whole New Years thing. Because, setting an intention and seeing how that unfolds in your life is just as rewarding as setting a tangible “I’m going to do this specific thing.”  To some, I’m sure it doesn’t feel as satisfying as saying “I’m going to run a half marathon” or “Be a vegetarian” or “Floss my teeth twice a day” and typically I am a giant fan of tangible lists, but when it comes to setting goals and intentions for the year, I’m more of a right-brained individual.

This year, I have 3 major Themes that I’m trying to focus on and I’m excited to explore where they will take me. 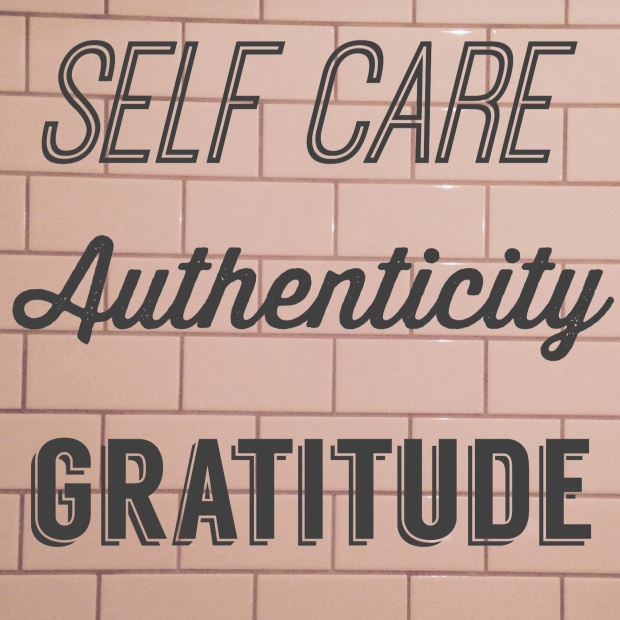 1) Self-Care
The same people who are skeptical about Nutrias have also commented “What are you talking about, you are great at self care! You go to yoga, you eat healthy.”  And these things are true, but a few weeks before Christmas I was sitting in a restorative yoga class (literally strapped in and propped up in a supported boat pose) and I just couldn’t shake the idea that I needed to start taking better care of myself. Not just in the physical sense, but also mentally and emotionally.  Yes, I DO teach yoga and barre, and I DO try to eat healthy, and I am oh so very good at letting myself put my feet up and relaxing with a glass of wine when things get stressful, but I think there is more to it than that.  For all the aspects of self care that I’m really good at, there are others that I’m pretty terrible at. I don’t get enough sleep, I sleep with my cell phone and laptop next to me, I don’t push myself to exercise daily, I drink too much coffee… the list goes on… and overall I don’t think these things are terrible, but I know there are times when I could be making a better effort to take care of myself… I’ll probably still eat boxed mac and cheese from time to time, and let’s be honest, the coffee isn’t going anywhere, but I’m excited to explore Self-Care as an overall theme for the year. (afterall, I’m turning 30 in 2015!) And I’ll be the first to admit, I don’t know exactly what this is going to look like, but I imagine it will involve drinking a lot more water, and a little less booze. Being outside more, making meaningful connections, and taking more yoga classes. Spending more time in meditation, drinking a little more green tea, and a little less coffee. Incorporating essential oils into my daily life,  reading more books, taking more introverted re-charge moments, and also pushing myself out of my comfort zone more. It’s giving myself permission to say no, and inspiring myself to say yes. It’s going to bed a little earlier, and turning off technology at 10pm (ish). Its taking  occasional Spa days, and grown up vacations.   And what I love most about this idea of Self-Care, is that I know it’s going to look different every day. It’s not an all or nothing thing that says “You have to do ABC to achieve XYZ”  It’s more about tuning in to how I’m feeling in each moment, and giving myself the support that I need physically and mentally.
2) Authenticity
This year I’m going to try and focus on being the most authentic version of myself. I’m not saying that I have a tendency to be fake or in-genuine, this blog is pretty real!  but Authenticity is another word that keeps coming to mind when I think about 2015. It’s interesting, because I feel like there is so much encouragement out there to celebrate what makes you unique (and I fully agree with this!) but sometimes I think maybe We (I’m using the general WE here, and) are a little guilty of pushing our uniqueness on people. Maybe pushing isn’t the right word… Let’s say we tend to lead with what makes us different, as a way to stand out to make an impression. And overall, I don’t think there is necessarily anything wrong with that. I think people need to own their quirks and what makes them different and celebrate their unique view of the world, but I think sometimes in doing that it is easy to lose other parts of yourself. I know that I sometimes play to my audience, I highlight areas of my personality that I think other people will be interested in, I post photos on social media that I think other people might like etc… And its ridiculously easy when we are building our own personal brand to put a spotlight on a few key things we want people to remember, while we squirrel other things away. Again, I’m not saying that I have this secret life, and that I’ve been creating a false persona… But I am saying that in 2015 I’m not going to worry about playing to my audience or pushing things into the foreground. I’m going to focus on having authentic interactions, I’m going to own my opinions, (even if that means jumping on some bandwagons) and I’m going to let my authenticity be the thing that attracts people.
3) Gratitude
I’ve said it before, and I’ll say it again. Gratitude is a game changer, and this year I’m going to try to focus more on the things that I’m grateful for. Big stuff, little stuff, totally random off the wall stuff. Whenever those little nuggets of negativity start creeping in, I’m going to try to focus on the good and have a sense of gratitude.
What are some of the themes you are wanting to focus on in 2015?