So a few months ago, I applied for a Freelance position at The Kitchn.com I Just got the official word this week that I didn’t get it (not like I was holding my breath) but since I did have a lot of fun writing this sample kitchen tour/ the kitchen of my dear friend Jay is awesome, I wanted to share it on my blog.  I had so much fun writing this/ taking all the photos, and this whole project was a huge creative outlet for me over the winter when I was unemployed, bored, a little heartbroken, and in desperate need of a project. I hope you all enjoy this brief little glimpse into Jay’s kitchen.

Exposed brick walls, turquoise tile, bright Descoware pots, a mis-matched four-pane window and a vintage Vitamix are just a few of the quirky features/items you notice when you walk into Jay’s kitchen. He has spent the last few years tweaking this Mid-century modern space into a room that feels casual, and functional while keeping with the era of the house. Jay is a huge fan of clean lines and minimalism, but the kitchen has just the right amount of personality to make the vast brick house seem cheerful and inviting.

When Jay moved into his home in McMinnville, Oregon the kitchen was the only area that needed a lot of work. The house was built in 1949, and the kitchen had a drop ceiling, florescent lights, and some interesting features (pink and yellow cabinets, gaudy wallpaper, and a washer and dryer just to name a few). With a fairly conservative budget (the entire house ended up needing to be re-piped, which slightly hindered his kitchen remodel plans) and a little bit of manual labor, Jay has transformed his once cavernous feeling kitchen into a wonderfully charismatic and functional space.

While the rest of the house is very minimalistic, the kitchen has a lot of personal touches, and pops of color. Never keen on having the same items as everyone else, Jay has spent several years acquiring some great finds at antique stores and thrift shops. He’s left most of the cabinets exposed so the unique pieces can be truly appreciated. My favorite thrift store purchase of his is a metal filing cabinet that serves as a creative wine storage rack.  Jay has also replaced a lot of the original cabinetry with a wooden potting bench, which is his favorite (and dare I say, the most functional) item in the kitchen. It serves as a great prep area, is awesome for storage, and adds a genuine splash of personality to the room. 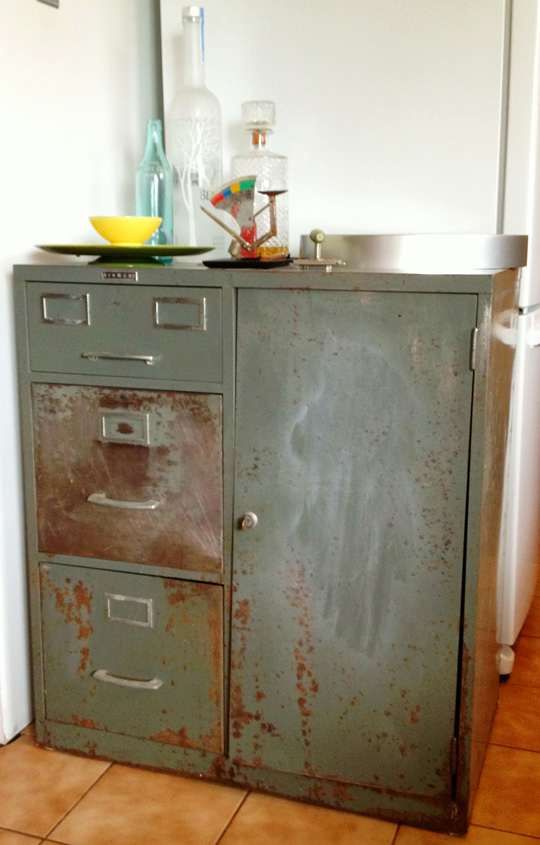 I sat and chatted with Jay as he skittered around the kitchen prepping a salad and re-heating some tacos for us to enjoy. The kitchen feels really comfortable and homey… which is one of the reasons he spends quite a bit of time in there. He typically eats his meals at the kitchen table while reading vintage cookbooks (sometimes out loud to his dinner guests, which is ridiculously charming). 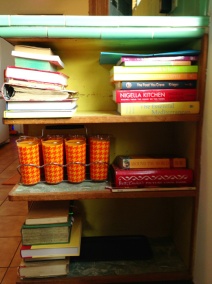 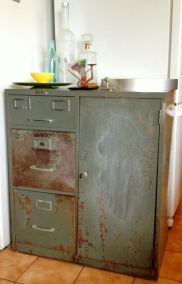 1. What inspires your kitchen and your cooking?

Basil! No joke. I always have basil in my home and think that most every dish is enhanced with a fresh herb. My go to dinner is a Caprese sandwich, roasted vegetables (usually broccoli, cauliflower, mushrooms & kale- roasted at 450 until they have good color!) and a salad. I eat this at least 2-3 times per week. It’s simple, fresh and I still feel as though I’ve “cooked” without a ton of effort. I also get a lot of ideas from vintage (and current) cookbooks. I’m not a recipe-driven cook, but I love reading about food trends from different decades. Just yesterday I picked up a vintage hors d’oeuvres book at an antique store.

2. What is your favorite kitchen tool or element?

Salt jars. I have three of them full of kosher salt strategically placed around the kitchen (one by the stove, one near a prep area and one on the little dining table). There’s something very satisfying about salting food with your fingers rather than a shaker. And, the jars, all with wood tops are really cool.
3. What’s the most memorable meal you’ve ever cooked in this kitchen?

Quite recently my closest friend came over for home-made tomato soup and grilled cheese sandwiches. I learned of the soup recipe while listening to Tom Douglas on The Splendid Table radio show. When the host asked Tom what kitchen gadget he couldn’t live without, he noted an immersion blender. He explained that he never really saw the use for one, but is now a believer. I thought: “I have an immersion blender. This sounds delicious. I’m going to make it tonight” Let’s just say the immersion blender couldn’t be found (probably still packed from the move), a food processor was used, tomato soup ended up everywhere, sandwiches burnt and the wine was delicious.
4. The biggest challenge for cooking in your kitchen?

Not having an oven hood.
5. Is there anything you wish you had done differently?

Fewer lights. The fixtures I chose have three spotlights each and I installed five of them. It’s not a big kitchen. I have no idea what I was thinking.
6. Biggest indulgence or splurge in the kitchen:

A double convection oven.
7. Is there anything you hope to add or improve in your kitchen?

I’d like to install some sort of shelving or cabinetry next to the fridge, and eventually I’d like to put in a new floor.
8. How would you describe your cooking style?

9.Best cooking advice or tip you ever received:

10. What are you cooking this week? 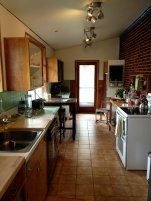 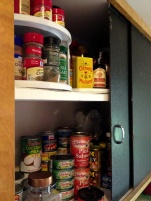