Here’s the thing: I got a job, and start on Friday! (more on this later) in the meantime I’ve been scrambling around trying to get my life in order with my final week of free time. Naturally I took the weekend to play play play, and spent 4 days eating, drinking, socializing, having good conversations, shopping, laughing, swapping stories, running, catching up, and hanging out as much as possible! SO fun, but I am a little exhausted. =) It really made me realize how much I miss personal connections. Yes, I have them, but blogging aside, I tend to be a really quiet and private person, and sometimes I forget how much I love that human interaction. Just being able to pick up the phone and have a random conversation, or tell a quick little “this totally made me think of you today” is probably what I miss most about being in a relationship.  Obviously, social media makes having these types of connections a little easier, I can post a picture of what I’m doing on instagram, or facebook, and people can like, comment and interact, but it’s still not the same as sharing those interactions and anecdotes one on one…

My week is of course filling up with projects… the house needs to be deep cleaned, the garage organized, there are craft projects awaiting, yoga classes to plan… but first things first, today I decided to spend most of the afternoon frolicking in the sunshine. (I did a fair amount of yard work, actually). I decided that since my free time will soon be much more limited, I was allowed to savor the afternoon, sipping on pink wine, playing with the dog, and basking in the sunshine.  Of course, at 7PM, after I had run a few errands, (and went over to my brother and sister-in-laws, to assist with some fruit tree pruning) I realized that the only thing I’ve consumed today is a bowl of cheerios, two cups of coffee, and two glasses of rosé. I’m a regular poster child for healthy eating habits over here… How does this even happen? I must have been really distracted by the sunshine, because typically if I don’t eat most of the day I get HANGRY (Angry out of hunger) and floppy, and irritated… All of these things hit me the second I walked out of the grocery store, but I think it is somewhat of a miracle that I’ve been able to last the day… Man cannot live on bread alone… but apparently this woman can survive on cereal and cheap wine?

Once the Hanger pangs set in, I zipped home, and decided to whip together one of my favorite basic comfort-food casseroles. It is quite possible I have blogged about it before, but quite frankly, it deserves at least a few posts, because it is that awesome. I give you Snappy Tomatoes:  Firstly, this dish is hilarious, and not one I would typically be drawn to. I like fresh, local, green dishes, and this is definitely not that. Not even close. It more resembles tomato soup in casserole form, and though it isn’t green, or fresh (or healthy?) sometimes you just need a quick and easy casserole. 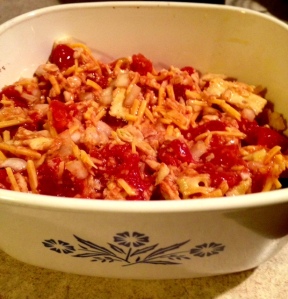 Mixed up and ready for the oven

The recipe is my Grandmother’s and is published in her church cookbook from North Dakota… I really cannot say enough things about these recipes… Do people still make church cookbooks? Are they still hand-typed, and filled with gems like “Vegetarian Bologna” (do we even want to know what might be in that? I stopped reading after bacon yeast.) I suppose these days we can just find recipes online, and rather than getting together with a group of ladies and comparing notes, and exchanging recipes, we just read each other’s blogs… but there is something undeniably charming about these old school recipe compilations. 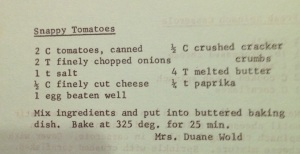 I always use more paprika, and more onion than called for in the recipe. I also substituted  olive oil for butter, just because I was feeling extra hungry, and didn’t want to take the time to melt the butter.  I used cheddar cheese this evening, but I think cottage cheese or even ricotta cheese would be pretty delicious… the recipe is quite basic, so it’s really easy to give it your own flair.   The recipe makes just the right amount for 2-3 people (or yourself with leftovers… or not… depending on how Hangry you might be…) and is a perfect little dish for a Monday evening. Simple. Basic. And a little snappy.

One thought on “Snappy Tomatoes: Putting a little pep into your Monday, and a way to curb the Hangries”